Posted By DaSocialManager On September 16, 2019
Tags
Davido and Chioma
Davido Getting Married To Chioma
Entertainment

DMW boss, Davido has just engaged his longtime girlfriend, Chioma Avril and is all set to walk down the aisle with her come 2020.

Announcing the engagement via his social media page Davido captioned a photo of her soon to be wife showing off her ring with the caption, ” SHE SAID YES!!!! BIG ROCK 💎#ASSURANCE2020″.
The DMW boss had some time last week shared a photo which suggested that he had already performed the introductory marriage rites. But now it’s all official, Davido is getting married to Chioma.

What a perfect end to the boyfriend/girlfriend relationship. See her beautiful ring. 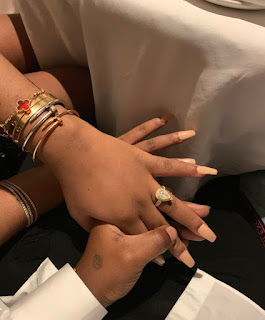 Love is a beautiful thing what God has joined together no man can put asunder.


Love is a beautiful thing they say and he who finds a wife finds a good thing. Davido has found a good thing and has tied the knots with his girlfriend Chioma. God help them in building their home Congratulations. At last yes, we stumbled on a rare video of the moment the engagement happened.

DAVIDO IS GETTING MARRIED!!!