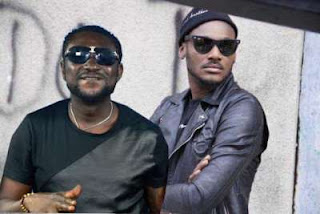 After coming on social media to call out 2baba yesterday, Blackface has now taken the issue he has with the legendary musician to the TV stations.
Blackface was granted an interview by TVC earlier today where he made some revelations about 2baba. He said “Let Somebody Love you,” a love song 2baba released in 2014 is his property and that he is so upset with him because no credit at all was given to him.
He also said in the interview that there is a Kabbal that is ganging up against him in the industry, he said the Kabbal downplays his accusations of 2baba’s misdeeds to him.
The “Erima” crooner also used that medium to bash 2baba’s 2018 hit single with Peruzzi; “Amaka,” calling it a stupid song.
Watch post below: