This Crater on Mars Traps the Cold, and Remains Filled With Ice, All Years - Tune9jaupdates.com.ng

This Crater on Mars Traps the Cold, and Remains Filled With Ice, All Years

Posted By DaSocialManager On January 08, 2019
Tags
Tech
This Crater on Mars 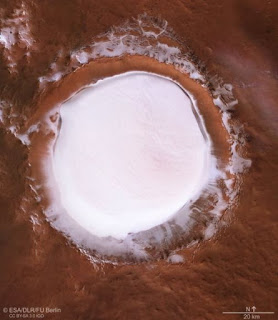 On June 2nd, 2003, the European Space Agency’s Mars Express  mission left Earth to begin its journey to Mars. Six months later (on December 25th) the spacecraft fired its main engine and entered orbit around Mars. This Christmas will therefore mark the fifteenth anniversary of the orbiter’s arrival and all the observations it has made of the Red Planet since then.

Appropriately, the Mars Express  mission was able to commemorate this occasion by capturing some beautiful photos of a Martian crater that remains filled with ice all year round. This feature is known as the Korolev crater, which measures 82 km (51 mi) in diameter and is located in the northern lowlands, just south of the northern polar ice cap.

The images were taken by the orbiter’s High Resolution Stereo Camera (HRSC),  which was contributed to the Mars Express  mission by the German Aerospace Center (DLR).  This instrument captured five “strips” of the Korolev crater during five different orbits around the poles, which were then combined to produce images of the crater in perspective, and context, and offer a more complete view of its place in the north polar plateau (or Planum Boreum). 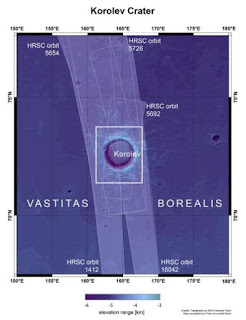 The crater is named after Sergei Korolev, the chief rocket engineer and designer during the Cold War-era Space Race, and widely-known as the “father of Soviet space technology.” Between the 1950s and 1966 (when he died), he worked on several pioneering space programs, which included the launch of the first artificial satellite (Sputnik 1) into orbit.

In the 1960s, he played a major role in both the Vostok and Vokshod  programs and also oversaw the launch of the first dog (Laika) and the first man (Yuri Gagarin) into space. He was also intrinsic in the development of Russia’s first interplanetary robotics missions to the Moon, Mars, and Venus and helped develop the precursors to the Soyuz launcher – which remains the workhorse of the Russian space program.

Korolev itself is a very well-preserved example of a Martian impact crater and is filled year-round with ice. In fact, it is estimated that the ice sheet is 1.8 km (1 mi) thick in the center and contains an estimated 2,200 cubic km (530 cu mi) of water ice, which is comparable in volume to two of the Great Lakes (Lake Erie and Lake Ontario) combined.

The constant presence of ice in this crater is due to a phenomenon known as a “cold trap”, which is caused by the floor of the crater being deeper than the rim – in Korolev’s case, 2 km (1.24 mi) deeper. As air moves over the deposit of ice, it cools down and sinks, creating a layer of cold air that sits directly above the ice itself. This process ensures that the ice does not sublimate from temperature changes and keeps the crater permanently icy.

The sight of such a massive, ice-filled crater… doesn’t that just put you in the holiday mood? And is it not entirely crazy to think that someday, this crater could be a popular tourist destination? Strap on some skates, maybe play a little game of ice hockey? And all the while you get to enjoy the experience of doing it all in about one-third Earth’s gravity!