Over 200 containers Lost, found at the bottom of North Sea - Tune9jaupdates.com.ng

Business Containers Over 200 containers Lost, found at the bottom of North Sea

Over 200 containers Lost, found at the bottom of North Sea 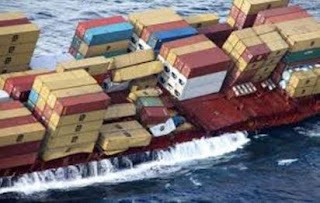 Most of the containers that were knocked from one of the World’s Largest Cargo ships have been located on the floor of the North Sea, Dutch Authorities said on Monday.

Using sonar technology, 220 of the 281 containers have been found, according to the Dutch Ministry of Infrastructure and Water Management.

It said 18 containers washed ashore since they toppled into the water on Jan. 2 during stormy weather as the MSC Zoe navigated its way from Antwerp, Belgium, to Bremerhaven, Germany.

Around 40 containers are still missing.

One that broke open was transporting 250 sacks of toxic peroxide in powder form.

Some sacks had washed up on shore.

The other container with dangerous goods, which holds 1,400 kilograms of lithium batteries, is still unaccounted for.

The ministry said it does not present an acute risk for the environment.

Efforts to recover the containers could take months.

The Swiss shipping company MSC has agreed to take on all costs for the clean-up and salvage operations.

The incident saw huge amounts of packaging plastic and household items, including televisions, washed up on coastlines in the Netherlands and Germany. (dpa/NAN)
To upload your music on Tune9jaupdates and get massive download, contact us now via:
Whatsapp: +2348067294479
Email: Tune9jaupdate@gmail.com