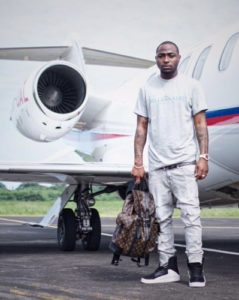 Davido has just announced probably what will turn out to be the most unexpected news of 2019 as he took to his twitter to reveal he is expecting another private jet.
You would recall the superstar shared news of acquiring a private jet last year which he eventually did. Although some were and are still of the opinion that the jet does not belong to him but his father.
However, in a Q&A session on his Twitter page, a fan jokingly said people are already carrying about the rumour that he has bought another private jet, expecting an hilarious or cryptic answer; Davido responded to the fan saying “another one is actually on the way.”
This has left us in awe as we are wondering why the DMW boss would be wanting another PJ, Could it be true that the one he claimed he got last year is for his father as he now wants to get his own this year?
This is a question begging for an answer.
See post below: