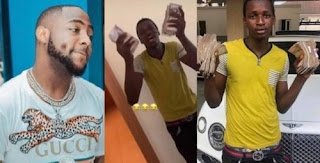 It was truly an eventful end of 2018 for Davido as he was dragged in a couple of mild controversies.
The singer was first dragged in the Kizz Daniel’s manager’s saga and then later called out by the boy he promised the sum of one million naira at his “City of Davido” concert in Lagos.
The boy who is now popular for the “i call Lati” anthem did an Instagram video where he called out Davido for not fulfilling his promise to him, just few hours after the show.
After the video, the boy got a backlash for being impatient, and Nigerians urged davido not to give him the money anymore. But as a generous man that he is, Davido overlooked his flaw and still went ahead to give him the money.
Meanwhile, the boy has invested the money by buying a tricycle popularly known as Keke Napep for commercial purposes. This is a good move by the boy who many tought will squander the money.
Davido shared the picture in excitement on his Instagram page, giving accolades to the boy’s thoughtful move.
See post below: