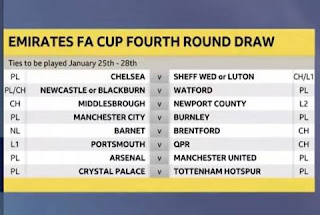 Arsenal will play Manchester United at the Emirates Stadium in the fourth round of the FA Cup following the draw on Monday evening.
The game will be played at the Emirates Stadium over the weekend of January 25-28 with confirmation expected when the television schedule is released.
However, due to United’s game against Burnley being played on January 29 the tie will have to take place on the Friday night or Saturday.

The two clubs last met in the competition in March 2015 at the quarter final stage – Angel di Maria was sent off and Danny Welbeck scored for the Gunners who won 2-1 at Old Trafford.

“Arsenal against United is the pick of the draw, in terms of the magnitude of the tie,” said BBC host Gary Lineker following the draw, adding: “Barnet will have probably wanted to draw a bigger club.”

SWANSEA VS GILLINGHAM
AFC WIMBLEDON VS WEST HAM
SHREWSBURY/STOKE VS WOLVES
MILLWALL VS EVERTON
BRIGHTON VS WEST BROM
BRISTOL CITY VS BOLTON
ACCRINGTON VS DERBY/SOUTHAMPTON
DONCASTER VS OLDHAM
CHELSEA VS SHEFFIELD WEDNESDAY/LUTON
NEWCASTLE/BLACKBURN VS WATFORD
MIDDLESBROUGH VS NEWPORT
MAN CITY VS BURNLEY
BARNET VS BRENTFORD
PORTSMOUTH VS QPR
ARSENAL VS MAN UNITED
CRYSTAL PALACE VS TOTTENHAM
To upload your music on Tune9jaupdates and get massive download, contact us now via:
Whatsapp: +2348067294479
Email: Tune9jaupdate@gmail.com