President Buhari Slammed Wife Because She Said His Government Are Of The Cabalz - Tune9jaupdates.com.ng 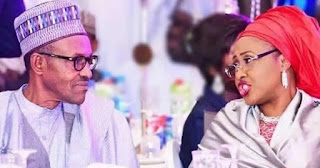 President Muhammadu Buhari has demanded evidence for the claim that his government is being run by a cabal.

He spoke in an interview with Voice of America, Hausa Service.

The President’s wife, Aisha Buhari, during an interview with the British Broadcasting Corporation, Hausa Service, had first alleged that her husband was being controlled by a cabal. S

She said, “The President does not know 45 out of 50 of the people he appointed and I don’t know them either, despite being his wife of 27 years. Some people are sitting down in their homes folding their arms only for them to be called to come and head an agency or a ministerial position.”

She had threatened not to campaign for him if things continued that way. The President had dismissed that statement by saying his wife belonged to the kitchen and the “other room.”

But while speaking at a leadership summit in Abuja earlier this month, Mrs Buhari challenged Nigerians to fight the “two or three people who have dominated this government.”

She said, “Our votes were 15.4 million in the last (presidential) election and after that only for us to be dominated by two people… this is totally unacceptable.

“If 15.4 million people can bring in a government and only for the government to be dominated by two people or three people, where are the men of Nigeria?

Where are the Nigerian men? What are you doing? Instead of them to come together and fight them, they keep visiting them one after the other licking their shoes (I’m sorry to use those words).”

However, during the VOA chat, the interviewer asked Buhari to formally respond to the allegations in the light of his wife’s recent statement.

“Have you heard of the word cabal? So many people have spoken about the cabal; alleging that there are a few people in charge of this administration, that you are not the one in charge.

Even your wife said something about this recently,” the VOA reporter had asked. In response, President Buhari said, “That’s her business.

It shows I am a real democrat… What they are saying is different from what is happening. They (those making these allegations) should come out and say those things they feel were stage-managed by the cabal, which I was forced to do.

They should mention just one thing.” Don’t run from your wife’s allegation, PDP tells Buhari But the People Democratic Party advised the President not run away from the allegation levelled against him by his wife.

The PDP said the President had “tactically” admitted to the existence of a cabal in his government by claiming that the allegation had shown that he was a democrat.

The National Chairman of the PDP, Prince Uche Secondus, who spoke with one of our correspondents while reacting to the interview by the President, said Buhari should not trivialise the allegation by his wife. He said,

“I read what the President said about the allegation by his wife. He tried in vain to trivialise it. But he failed.

“The President should not run away from the issue raised by his wife, who by her position and privilege is the closest person to him.

He is claiming to be a democrat by the allegation and yet he is also asking the same wife to come and substantiate the same allegation.

“The President should not take us for a ride. He should rather come clean on it instead of trying to trivialise it.”

He even alleged that members of and supporters of the opposition Peoples Democratic Party whom he claimed constituted 50 per cent of those holding public office were responsible for the President’s perceived failures.

He spoke during the inauguration of the Buhari Support Organisation Campaign Office earlier this year.
To upload your music on Tune9jaupdates and get massive download, contact us now via:
Whatsapp: +2348067294479
Email: Tune9jaupdate@gmail.com