One killed, several injured in a Motor Accident On Boxing Day - Tune9jaupdates.com.ng

accident Viral One killed, several injured in a Motor Accident On Boxing Day

One killed, several injured in a Motor Accident On Boxing Day 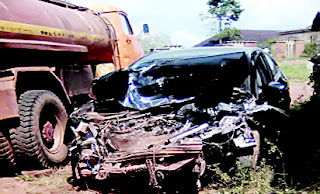 An unidentified male pedestrian was yesterday crushed to death, along the Lagos / Ibadan expressway, while waiting to board a vehicle to his destination.

This is just as a lorry laden with iron wire crashed on a 24 -seater commercial bus, at Kara-Isheri, long bridge, Ogun State.

Two of the passengers: a 62-year-old woman and another man, who sustained severe injuries, were rushed to the Accidents and Emergency Medical Centre at Lagos Toll Gate, by 7Up, as at time of writing this report.

The bus as gathered, lost break at Kara-Isheri, Ogun State and in the driver’s bid to control it, it rammed into a commercial motorcycle, injuring the rider.

Spokesman for the National Emergency Management Agency, South -West, Ibrahim Farinloye, who confirmed the incident, advised residents around Redemption Camp and Salami Interchange whose relatives were missing to visit Mowe unit command of the Federal Road Safety Corps, FRSC, for identification of the recovered body.

He said: “The attention of the FRSC Mowe unit Command was drawn to the body location by NEMA for recovery so that relations could have easy access to the body at the Unit Command.

“The attention of NEMA was also drawn to a mangled body of a person whose gender cannot be identified. The victim who is also suspected to be another victim of hit and run was located around Magboro/MFM end of the Lagos-Ibadan Expressway.

“NEMA is hereby enjoining public health officials and authority of Obafemi Owode council to expedite action for quick removal of the mangled body in view of public health implications if unattended to.

The agency has also reached out to Ogun State SEMA to mobilize the LGA authority to evacuate the body“ NEMA is also using this opportunity to appeal to beach operators and other funmakers to exercise and observe utmost caution.”
To upload your music on Tune9jaupdates and get massive download, contact us now via:
Whatsapp: +2348067294479
Email: Tune9jaupdate@gmail.com