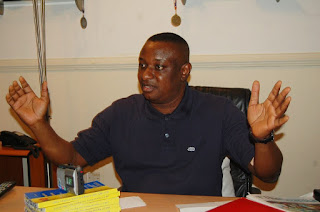 
Keyamo stated this while reacting to astatement credited to Atiku Abubakar, the Presidential Candidate of the People’s Democratic Party, PDP, disputing the assertion by President Muhammadu Buhari that “the system in Nigeria allows corruption to thrive because the system is slow in tackling corruption’’.


He said the handlers of the PDP presidential candidate would have tried to steer him away from embarking on political suicide mission, “but alas! They have decided to test the waters.”
According to Keyamo, locally and internationally; President Buhari stands several miles away from Atiku Abubakar in matters of integrity.
He said: “When the President used all his life in public office building a reputation and a name, Alhaji Atiku Abubakar used all his life in public office to build mansions and acquire personal wealth.
“Now Judgment Day has come when the credentials needed by the Nigerian people for the highest office are not the buildings and wealth but the simple quality of integrity.
“Alhaji Atiku Abubakar cannot eat his cake and have it.’’
Keyamo described Atiku Abubakar as one of the greatest beneficiaries of the failed system in tackling corruption that was in place before President Buhari took over in 2015.
“We know he is aware of this, hence, his latest diatribe against President Muhammadu Buhari amounts to nothing but disgusting grandstanding and an attempt to mock the system.
“If the system in Nigeria was indeed working, Alhaji Atiku Abubakar would not have acquired substantial shares in INTELS in clear conflict of his duties as a Customs Officer whilst in office. Those shares would have belonged to the Nigerian people by now.
“If the system in Nigeria was indeed working, Alhaji Atiku Abubakar would not have run a monopolistic company called INTELS all these years, ripping off the Nigerian people and the Nigerian State before Muhammadu Buhari came and broke that monopoly.
“If the system was working, Alhaji Atiku Abubakar would have been prosecuted and jailed for various acts of corruption and abuse of office after he left office as Vice President, some of which are:
“For himself and his boss, President Olusegun Obasanjo, granting themselves licenses to build universities as President and Vice President whilst in office in clear breach of the Code of Conduct for Public Officers. Those Universities would have been probed, seized and transferred to the Nigeria State and the Nigerian people by now.
“Laundering slush funds to the United States of America using phony companies, part of which was used to fund his present American University in Adamawa State through which he is also extorting Nigerians through exorbitant fees.
“It is public knowledge that this indictment is contained in a US Congressional Report that has led to the prosecution and conviction of his accomplices in the US, which are William Jefferson and Siemens.
“They were convicted under a system that works, whilst he has been walking free in Nigeria and even aspiring to the highest office in the land. It is also public knowledge that his ban from entering the United States was as a result of these indictments.
“His indictment and recommendation for prosecution by the Report of the EFCC over the PTDF scandal whilst he was Vice President,’’ he said.
Keyamo also underscored the case filed against Atiku Abubakar by some public spirited Nigerians alleging that the PDP presidential flag bearer never paid his Personal Income Taxes as at when due, yet he wanted to ‘get Nigeria working again’.
Keyamo challenged him to publicly display his Personal Income Tax receipts for the three years preceding 2018 to show that he did not just run to FIRS in 2018 to pay his backlog of Personal Income Taxes.
“For the information of Alhaji Atiku Abubakar, President Muhammadu Buhari’s gallant efforts in tackling corruption headlong has led to the conviction of the President’s own party men and ex-Governors who served under PDP and for acts they committed whilst in PDP,’’ he said.
He added that 703 persons and institutions had been convicted by the EFCC under the watch of President Buhari since 2015.
He stated that these recoveries were made from principally Abubakar’s party men who now wish to lead Nigeria with him.
“They include 407 mansions since 2015; N794 billion, over 261 million dollars, 1.1 million Pounds Sterling, 8.1 Million Euros, 259 Automobiles and a fully functional hospital, St. Solomon Health Care Centre at 24, Adeniyi Jones Street, Ikeja Lagos.”
To upload your music on Tune9jaupdates and get massive download, contact us now via:
Whatsapp: +2348067294479
Email: Tune9jaupdate@gmail.com