Billboard Announced Mariah Carey’s ‘All I Want For Christmas Is You’ As Top 1 On Billboard For The First Time In 25 Years - Tune9jaupdates.com.ng 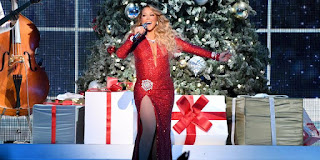 For Twenty-five years ago, Mariah Carey blessed our ears (and the airwaves) with the winter-y magic of her joyful Christmas classic, “All I Want for Christmas Is You.”

The 1994 carol has yet to be bested by any other R&B-pop holiday jingle since it’s release. Interestingly enough, the song, which has long been synonymous with the holidays, has never topped the charts in its history and narrowly missed the mark in 2018 after it ascended to No. 3.

This year, in anticipation of the forthcoming Christmas season, Carey tapped into the holiday spirit early. On Nov. 1, she shared a video of herself going to bed in her Halloween costume only to wake up to a call from Santa dressed in Christmas clothes.

NOW, IT APPEARS THE QUEEN OF CHRISTMAS HAS YET ANOTHER REASON TO CELEBRATE THE HOLIDAY SEASON THIS YEAR

On Monday (Dec. 16), Billboard reported that the legendary songstress’ “All I Want for Christmas Is You” reached No. 1 — 25 years after its initial release.

“We did it,” Carey tweeted in response to the big news.