I Will Expose You All Iyanya Including Your Sugar Mommies - Ubi Franklin - Tune9jaupdate.com.ng

Not long the man with six pack Iyanya on a interview exposed how his Former partner Ubi Franklin has been cheating them including Tekno. And today is Ubi Franklin turn trying to expose Iyanya on an Interview with him. From partners and now opening their secret to the world.

Iyanya the lover boy, the man with six pack, who claims Ubi is a betrayer has gone ahead to claim he is also a woman beater, insinuating that he physically assaulted Emma when they dated. Franklin has refused the new allegations saying Iyanya is only going to make him talk if he goes on with these claims.

Ubi also insinuated that Iyanya’s relationship with Yvonne Nelson ended as a result of Iyanya’s abuse of the actress.

Ubi adds that if Iyanya leaves him no choice, he is ready to release the names of all the married women he has slept with. 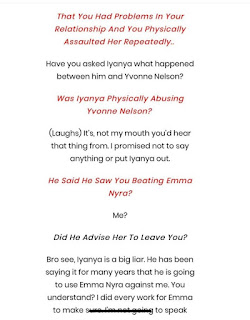 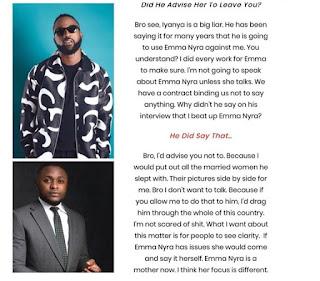