The European Union has expressed its concern about food security in Nigeria, earmarking 10 million euros for an Agricultural Intervention Project, to Support Nutrition and Resilience in 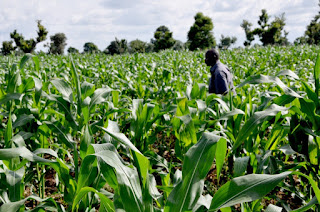 Taraba State.Speaking at the flag off exercise in Jalingo, the Ambassador of the European Union to Nigeria said the money allocated for the project was from taxpayers funds across the European nations.
Correspondent Owolabi Adenusi  reports that the ever increasing population and the violent crisis in many parts of
Nigeria, has raised concerns about the threat this may have on food security in the country
It has prompted this collaboration between the Taraba state government and the European Union which is designed to empower small scale farmers in rural communities across six local government areas of the state.
The EU ambassador to Nigeria, Ketil Karlsen who was represented at the flag off of the scheme in Jalingo by the Head, Nutrition and Resilience section of the union Montserrat Pantaleoni, said the intervention is expected to lead to the creation of more jobs that would ensure food security.
Oxfam, one of the project sponsors, puts 77 per cent of Tarabans as living below poverty line which is higher than the national average of 46 per cent.  It discloses that 300,000 persons from 30,000 farming household would be
targeted in which 50 per cent must be women and 30 per cent youths.
Speaking on the intervention, governor,Governor Darius Ishaku, expressed his government’s commitment to ensuring success of the four-year project.
The project will be implemented within a four year period in Takum, Zing, Kurmi, Donga, Wukari and Ardokola local governments, areas that have experienced farmer-Herder conflicts.
To upload your music on Tune9jaupdates and get massive download, contact us now via:
Whatsapp: +2348067294479
Email: Tune9jaupdate@gmail.com